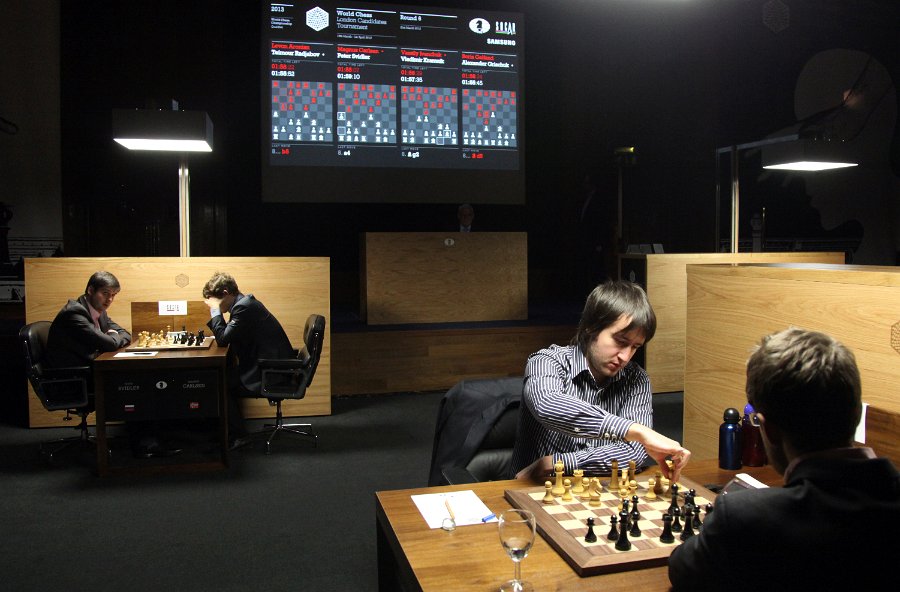 Carlsen got very solid position out of a Ruy Lopez against Svidler. The novelty was 15.Bc2 with the usual being 15.Ba3 instead. Carlsen managed to open the position up with d5 on move 17 and his position looked very active. It wasn’t a good idea to capture the pawn on a5 on move 22 as it would have exchanged a good R for a passive one on a1. Perhaps 25.cxd4 was a better choice. Naturally, 25…Bxh3 looked very interesting and should give Black a win but it is not easy to spot when you are playing :). But even after taking on d3 Black pieces were very active. 33.Qh5 was a mistake but it was nearly impossible to find 33.Re8 which was the only move which wasn’t losing anything.
Kramnik’s Catalan was also very interesting! 9.Nc3 is a very rare move, 9.Bf4 or 9.Bg5 are frequently played. 10.Rfd1 appears to be a novelty. The exchange sacrifice on f6 was justified and quite typical. The king and pawns become weak and it looks like white got very good chances for attack. 21.Ne4 or 21.Ra5 looks like possible improvements over 21.Qd2 after which it is difficult to find anything except for a draw.
Gelfand chose the Sicilian and got a very active position against Grischuk which white pieces being passive and mostly all on the first rank. It is possible to suggest many improvements later in the game but it is easy to show it after analysis with an engine rather than during the game :).
Radjabov-Aronian was another Ruy Lopez with Black getting a very comfortable position out of the opening. 16…Bf8 was an interesting choice in my opinion with the idea being to protect the h6-pawn and to leave the B on e3 where it blocks the R. White attempted to attack the king and win space on the kingside with 19.g4 but Black quickly exchanged in the center with dxe4 and went Ne7 to eliminate white’s most active piece. The position around move 20-23 looks still fairly equal when white opened the g-file with g5 to try to attack. 27…Ra6 was an important positional idea which improved the R and helped in defense. The mistake that got Black a much better position was 49.Kg2 which possible improvements being 49.Nf3, attacking e5 again and 49.Kh1.

Carlsen and Aronian lead the event with 4.5 points, Svidler and Kramnik have 3.