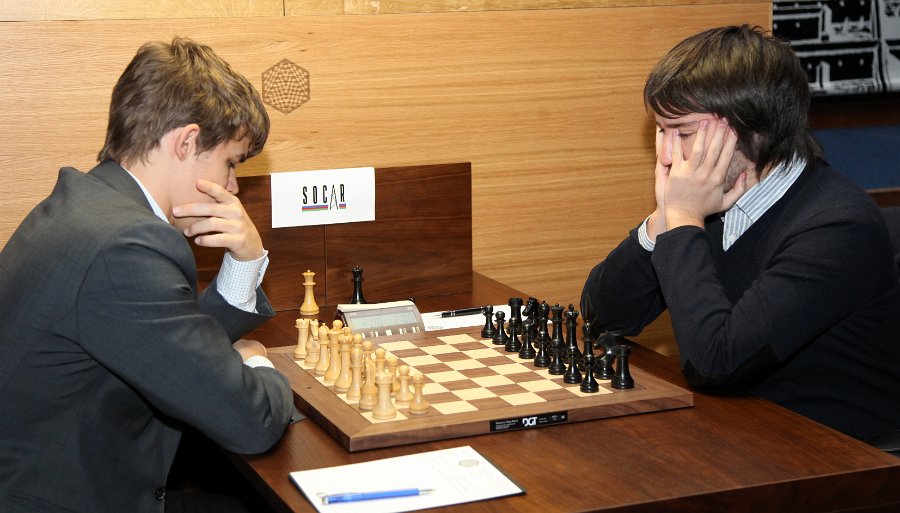 All games were drawn but but these were fighting draws! Kramnik got a very flexible position out of a Nimzo Indian against Gelfand and was on a good side of the equality in the middlegame. Only 18…Ne8 appears to be a mistake (with 18…Qd8 or 18…Be7 being better moves) due to the possible 19.Neg5 with very good chances for attack.
Ivanchuk played the long endgame line of the Mieses Variation in the Scotch against Svidler, preventing Black to get any play using his central pawns and was never on the verge of being even slightly worse :).
Carlsen played the Rossolimo with an early b3 against Radjabov and got some play on Black weak pawns but in return Black got possibilities for attack. With 11..f5 and later …f4 Black creates some dangerous threats on the kingside and gave white a reason to worry. Instead of 21.Qe4 (which is apparently a mistake) both Qg4 or Qh3 are OK for white although Black’s active position guarantees him fine play. On move 23 probably better was to win the exchange and then to improve the B via c7 to a5 when it would create an unpleasant pin. Black is at least much better, if not more.
In the Classical Variation of the Queen’s Indian Grischuk got a good position against Aronian and after multiple exchanges in the early middlegame kept the equality.

Carlsen and Aronian lead the event with 5 points, Svidler and Kramnik have 3.5.