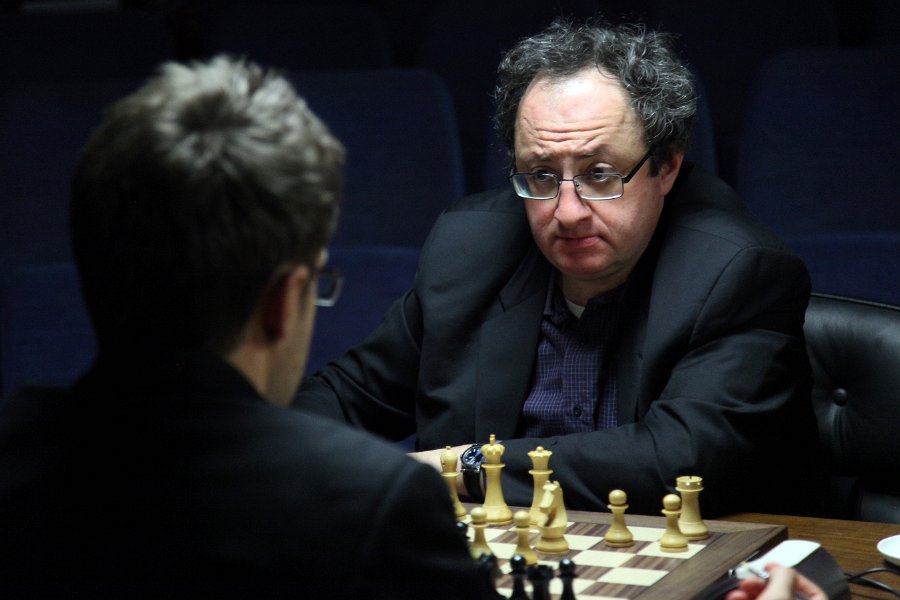 (The photo is taken from the official site of the event)

Kramnik played his favorite Catalan against Carlsen, got a better position out of the opening and won a pawn on move 23. Perhaps 25.Qd4 was a better choice as 25.Be5 allowed a simplification which helped Black to equalize.
Svidler and Grischuk created an incredible game! In the Saemisch variation of the King’s Indian Grischuk made a novelty on the 12th move instead of the usual 12…Neg4 and got a very good game due to much better development and king placement. Probably, the queen sacrifice wasn’t justified as Black pieces were very active. Black sacrificed an exchange on move 25 to eliminate the bishop pair and open more files and diagonals. Because of Svidler’s mistake on move 29, Black could have won a piece with 29…Qe5.
Aronian got a pleasant equality against Gelfand and had some pressure in the center after the opening. Perhaps improvements can be suggested on moves 18, 20 and 25. 26…Bf7 for sure was a mistake and instead of it I like 26…Bd1, activating the B and having in mind the invasion on the d-file. Later on it is possible to improve white’s play many times but time-pressure can be a tricky thing :).
Ivanchuk entered the middlegame having a slight space advantage but Black’s position looked very solid although without any counterplay. Perhaps in the rook endgame it was better to continue the tour of the king and to march all the way to c7-square where it would help Black to push b7-b6 and create a passed pawn.