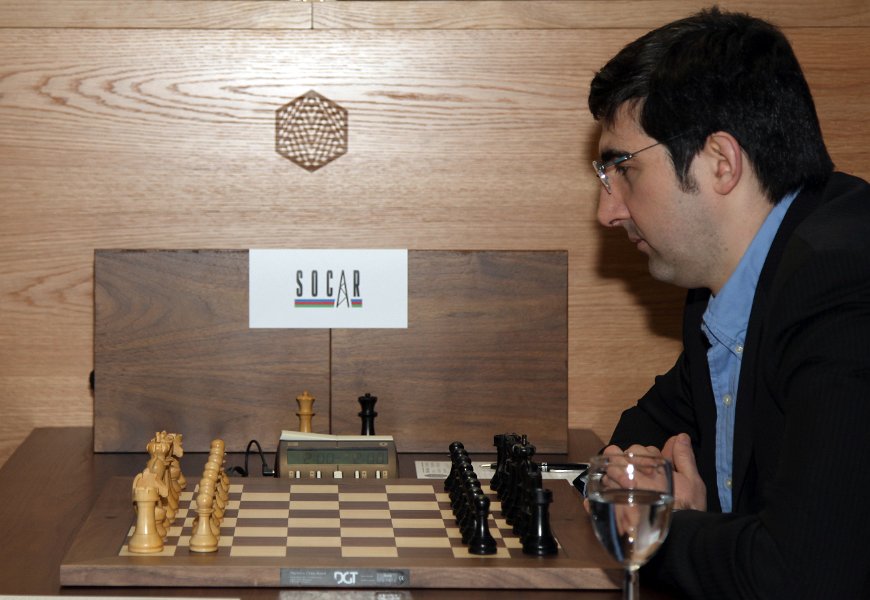 Carlsen got a slightly more pleasant position out of the opening, with 14.a3 being a novelty. Both players had made an incredible amount of precise moves up to about move 30 when possible suggestions can be 30.Rd8, 32.Rd7 and 33.Qe7. Black’s only real mistake was 39…Ra1 when eliminating the R gives white a winning endgame.
Kramnik equalized quite easily against Grischuk in the Berlin and even got some space advantage on the kingside in the endgame. Had white chosen 30.Ke3 instead of 30.Bxd4 he would have drawn without much difficulty.
Aronian-Ivanchuk game saw the Budapest Gambit! It seemed as white got a slightly better position and an extra pawn out of the opening but Black always had counerplay due to good N and bad pawn structure of white. Perhaps, 18…e4 looked like a good idea, blocking the B and expanding in the center as well as 28…h5 to try and stop the attack. Unfortunately, Black didn’t manage to get out of the time pressure and lost on time on move 30, already in a lost position.
Radjabov-Svidler was an early repetition of moves. Black could have tried to play on with 19…Qa3 or 19…Qc3 but white had a decent compensation anyway.

So, Carlsen is leading the event with 7 points, Aronian is 2nd with 6.5, Kramnik has 6.