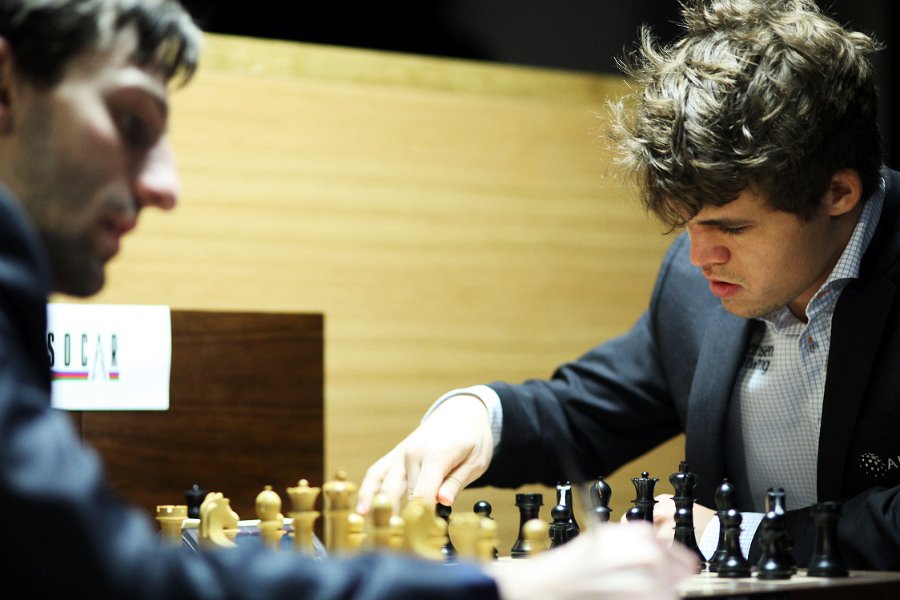 Aronian made a novelty on move 11 and got a slightly unpleasant, due to not so good development, but fairly even position. Perhaps a better choice was 15…0-0 in order to see if white Q moves or not and only then to capture on d4 winning a tempo. White later got rid of the doubled pawns by taking on d6 and got an active position. Still had Black played 22…Nd5, he would be holding on just fine.
Gelfand and Ivanchuk played a Gruenfeld game, when 13.c4 and 14…Qd8 were interesting ways to continue the game :).
Grischuk launched an h-pawn attack on Carlsen’s Gruenfeld but looks like it evaporated after Bf5-g6 as the King’s position looked quite safe. Black opened the position up just in time and got a nice piece play with 16…Qa5.
Radjabov repeated the line he already faced against Aronian and Grischuk back in 2008 but this time Kramnik played 9.Ndb5. 15…Qd7 probably wasn’t a good novelty as Black got a relatively passive position and instead 15…Qd4 that happened twice looks more active. In any case, white’s two bishops were controlling the board very well. 20…Ne5 looked active but seemed that the pawn sacrifice wasn’t good after all. 28th of Black was a blunder but instead of it 28…Rc7 could have given a nice play for the pawn.