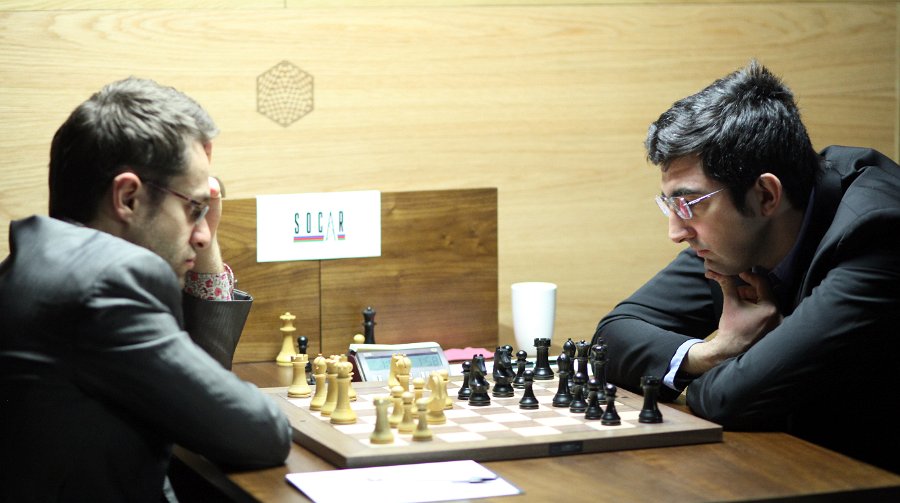 What a day! Full of incredible mistakes and very interesting sacrifices and ideas! 🙂
Gelfand-Svidler was a fairly quiet Gruenfeld game where Black equalized comfortably. Perhaps white should have fought for advantage with 13.e4 getting space in the center.
Aronian-Kramnik was an amazing game with many sacrifices and lots of mistakes :). Black got a very good position out of the opening and then even got a nice play in the center. Perhaps White should have gone for complication after 18.Bxf4 instead of sacrificing a piece. In the endgame draw for white was very near but all was spoiled with g5-g6 push…
Grischuk equalized with Black against Radjabov and went into an even two rooks + knight vs two rooks + bishop endgame. Black should have continued to wait, but an inacurate pawn move – h5 gave white a nice chance to win material had white played 43.Rxf5!.
And finally, Carlsen-Ivanchuk. White didn’t get anything out of the Taimanov and had to settle for a passive equal position and bad pawn structure. Still, there were no real problems but with the help of Rhf1, preventing g5, Black would be able to create the play he did in the game. And even later, 45.Rc8! looked like a good way to get counterplay.