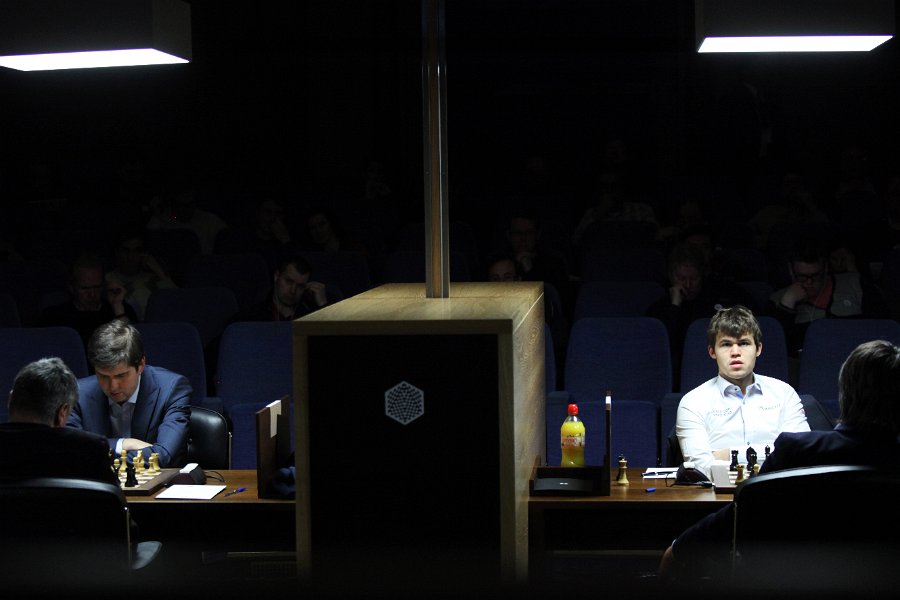 (Photo was taken from the official website of the event)

Carlsen again played a very long game, this time trying to outplay Radjabov from an equal position. True, white had an isolated pawn in the endgame but it was very difficult to get to it. The endgame proved to be very complicated as white had made some mistakes after precise play. Possible improvements are 78.Bc4, 80.Kd4 and 83.Kc3 but in this case Black retains a much better position.
Aronian equalized against Grischuk and should have played 14…Ng4 to exchange the knights actively. Instead, 14…Nd7 allowed white to preserve the knights and get a good game in the center. White was slightly better due to bishops pair and active pieces but it was difficult to get more than that.
Kramnik played a very rare line of the Fianchetto Gruenfeld but Black got a comfortable position and later created some pressure on the kingside. The 21st move of Black – Nf3 was perhaps a sacrifice but it wasn’t good as Black didn’t get much for the pawn and white became quite better. Around the 30th move various improvements can be found but overall it wasn’t easy for white to realize the advantage as Black pieces were active.
Ivanchuk played a rare line of the Advanced French against Svidler and didn’t manage to equalize. White, in attempt to complicate the position and perhaps get an attack on the king in the middle, sacrificed a pawn. White missed or perhaps didn’t like the incredible 18.Re1 move pointed out by the engine which threatens Bh5 and Qxd5 but in any case, b3 instead was also very strong. After that Black got under attack & into time pressure and lost on time…

Carlsen and Kramnik lead the tournament with 8.5 points, Svidler and Aronian have 7.

Pairings of the last round (the games start at the usual time!)