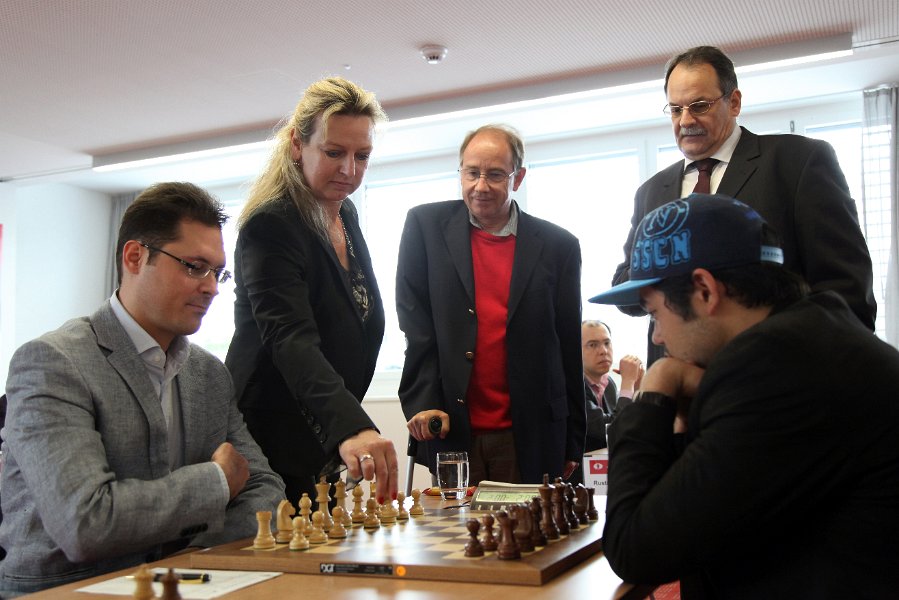 All games ended in a draw! Ponomariov, Morozevich and Topalov lead the tournament with 2 points.

Caruana-Morozevich was a quiet Spanish where Black managed to equalize by pushing c7-c6 and exchanges lots of pieces.

Mamedyarov-Kasimdzhanov was a Queen’s Gambit Declined. Black decided to allow exchanges in the center and got an isolated pawn in the opening instead of the usual 9…exd5. Still he controlled the center well and had a half open b-file to play on for it. After exchanging the minor pieces and the appearance of a Q and R middlegame the game became equal.

Karjakin-Ponomariov was a relatively rare line of the Scotch game which was played by many GMs including Carlsen with white. 12.Rhe1 was a novelty instead of Movsesian’s 12.Nd4 played last year. After many pieces came off the board white had a slight advantage in space and better pieces but didn’t manage to transform it into something larger.

Giri-Radjabov was a Catalan where white played the rare 12.a3 instead of the usual 12.Qc2 or 12.Bf4. Perhaps White should have gone for a pawn sacrifice 16.Nc5 but instead decided to repeat the position.

Leko-Nakamura was another “Poisoned Pawn” line but of the French :), with Nakamura playing it before at least twice (against Anand and Karjakin). Known theory ended on move 19 of Black as Nakamura made a novelty 19…Ba3 instead of the usual 19…Rc8. Looks like White was better in the middlegame and perhaps instead of exchange the dark square Bishops it was better to play 30.Qe3 securing a nice advantage.

Kamsky-Topalov was a rare line of the Moscow variation with 4.c3 (usual moves being 4.d4 and 4.0-0). Black got a solid position out of the opening and later initiative with the help of exd4 and knight maneuver Nd7-f8-e6. 26…Rxc3 was definitely an interesting exchange sacrifice but since White didn’t prevent it, it was still good on the next move. After that Black got a much better position and could have sealed it with 34…Qe5 going for the light squares on the kingside which got weakned by …g3.

Pairings of the 4th round