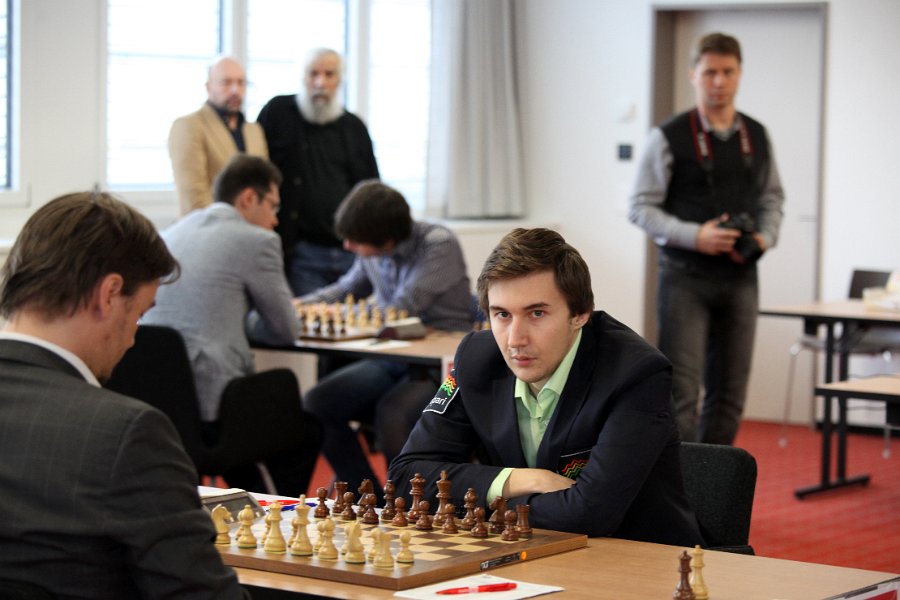 Again all games were drawn, despite many interesting positions! Leaders are the same – Ponomariov, Topalov and Morozevich and they have 2.5 points out of 4 games.

Results of the 4th round

Radjabov-Leko was a Queen’s Gambit Declined. Black King was safe in the center, even though the center was quite open. 18.Rb5-Re5 maneuver looks interesting and perhaps could give white an initiative if not more. Also, 33.g4 was an interesting path leading to advantage.

In Nakamura-Kamsky, Black equalized rather easily out of a mixture of Slav and Gruenfeld. Later on, due to better pieces, White won a pawn but Black was never in danger of losing due to active Rook.

Kasimdzhanov-Topalov was a King’s Indian with exd4 where White implemented a rare but very interesting piece sacrifice on f5. 14…d5 was a novelty which gave white the piece back by force but stopped the initiative. The position would have become equal had Black played 20…Bf8.

In Ponomariov-Giri, Black got a very solid position from the Archangel variation of Ruy Lopez. Once rooks came off the board nobody could press for an advantage anymore.

In Morozevich-Karjakin, White chose the very rare 9.Rc1 in the Classical Nimzo Indian and soon launched a pawn attack on the kingside. Still but breaking through in the center, Black’s position didn’t look dangerous. The R and bishop endgame looked equal despite the g7-pawn. Perhaps, it was worth playing 26…Rc5, preventing Bc2 and making the game more simple. The game got very complicated in the Bishops endgame and both sides missed many nice opportunities.

In Mamedyarov-Caruana game Black played an interesting novelty (14…Nc5) in the well known Gruenfeld line. 19.Rxf7 was a very nice sacrifice but it didn’t seem to work as Black King became safe again after some moves.

Today is the rest day!

Pairings of the 5th round