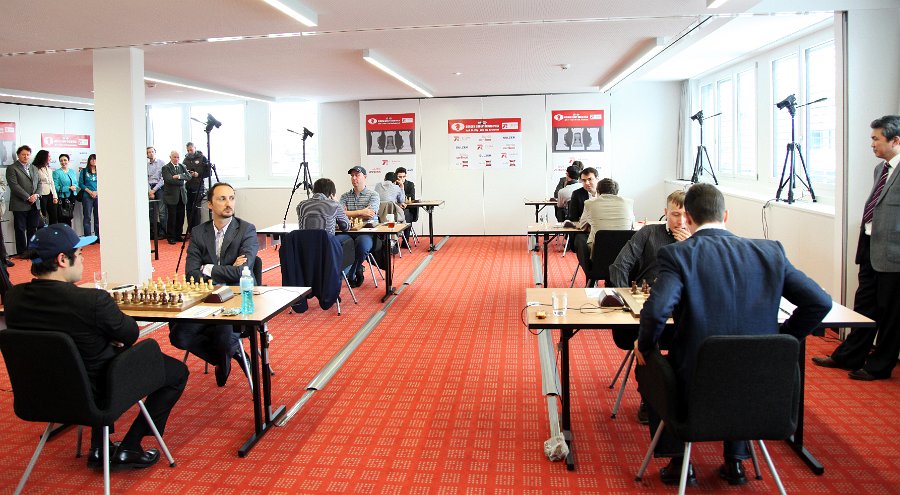 (photo taken from the official site)

What an interesting day – 5 games out of 6 were decisive!

Results of the 5th round

Leko-Ponomariov was a Bogo-Indian where White made a novelty on move 13. Black equalized quite easily and once queens came off it wasn’t difficult to predict the outcome.

Karjakin-Mamedyarov was a Classical Caro-Kann and White had made a novelty on move 16 – Nxh6. A positional sacrifice in a way – no clear path to an attack, no active pieces on the kingside. Still, White had a clear plan of g2-g4-g5 after which the Black king didn’t feel safe at all.

Giri-Morozevich was a King’s Indian Fianchetto variation. Black got a very good position out of the opening, sacrificed a pawn on move 21 and got an interesting play on the e-file & two bishops for it.

Caruana-Kasimdzhanov was a Queen’s Gambit Declined in which 13.Rd1 was an interesting novelty. The position looked fairly equal in the middlegame as both sides were maneuvering due to lack of open files. 37…b5 was done to block the position and try to create a fortress but instead 37…Qb5 was still equal.

Kamsky-Radjabov was a Rossolimo in which white implemented a novelty on move 9, instead of Tal’s 9.Ba3. Black’s position looked solid and equal throughout the middlegame when he decided to simplify and sacrifice a pawn to get to a R endgame. It looked drawish but naturally White decided to play it out :).42…Rb1 would have made it very difficult for white to win, instead he allowed Rc7+ and was soon lost.

Topalov-Nakamura was a Ruy Lopez which reminded me of Fischer games 🙂 Exchange on e5, then a4-axb5 and play on the a-file for a small advantage or more. Black’s last change of getting counterplay was 33…Nh1 or 33…Nef5 stopping the white h-pawn from advancing.