This very strong event was played parrallel to the women’s event.

Here are the final standings:

And a selection of photos from the last day:

The event was won by GM Kosteniuk who shared 1st-2nd places with IM Mongontuul but had better tie-breaks! GM Zhao Xue won the 3rd place as she was also better than WGM Gunina on tie-breaks.

So, here are the final standings:

And a selection of photos from the event

Vassily Ivanchuk won the event with 9 out of 10, Short was 2nd with 8.5. Kulaots and Roiz shared 3rd-4th, with Kulaots being 3rd due to better tie breaks.

Here are the final results of the first 50 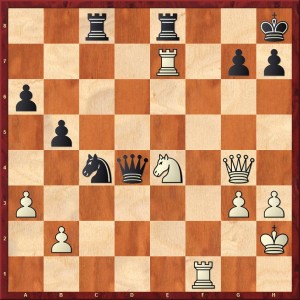 White to play and win

This very strong female event is under way in Moscow. Three players – Zhao Xue, Monguntuul and Gunina lead the event with 3 out of 4.

Here are the results round by round

And a selection of photos from the event’s website

And two interviews, taken from the main website of the event

Alina Kashlinskaya, 17 years old Moscow citizen, made a little sensation in the second round – defeated former world champion Alexandra Kosteniuk.
– I was not so lucky in the opening. I was waiting for Nemtsovich Defense but prepared another option and didn’t remember at all what did my competitor play. In the opening I spent a lot of time, gained a better position. The some pawn structure emerged and neither of us wanted to change it. I was always trying to attack but closer to time trouble I realized she recaptured the initiative. It resolved in time trouble – such a complicated position, lack of time to count something. Sasha made a mistake on 29th move – after moving bishop to h6 position was bad.
– What did you feel about playing with former world champion?
– I just wanted to play good. Before the game it was pleasant – to play against former world champion. Then we sat at the desk and all thoughts went away. When there is a position on the desk – no matter who’s in front of you – Kasparov or beginner.
– Is this your first duel?
– In a Tournament with classical control – yes. Before that we used to play in training camp before Olympics – but speed-chess in pairs.

Batkhuyag «MUNGUNTUUL: IT WAS TIGHT FIGHT IN EACH GAME»
Batkhuyag Munguntuul – leader of the robin tournament for young grandmasters, she graduated from Russian State Social University and now she is the strongest chess player of Mongolia. Batkhuyag got 100 percent result after another victory in the third round of the tournament.

– Jolanta usually plays the same opening, so I haven’t got any problems with training for the game, – told Munguntuul after her todays match versus Poland Jolanta Zawadzka. – After the opening she has sacrificed quality for the initiative. In several moves I offered it back, but in that case she will lose pawn and will be in worse endgame. Jolanta tried to attack, but she hasn’t got any compensation for the material. And at the end she blundered the bishop.

– Batkhuyag at this moment you doesn’t lost any game on the tournament – were these games for you?
– I can’t tell that this was easy. It was a tight fight in the each game and in the first two rounds.

– You just graduated from RSSU; do you feel any special support?
– Of cause I do, I studied here for 5 years. But I wasn’t in Moscow for a long time. I have arrived to the tournament a little bit earlier – went for a walk, met with my friends.

– Do you want to return and to continue your education?
– I think no. I already left and if I’d like to continue education – I should stay at once.